Summer Fete with a twist for latest Charity Day!

On Friday 25th May we hosted our latest charity day this time led by the General Healthcare team and the Business Support team raising money for The Rowan’s Hospice.

The Rowan’s Hospice are a local charity based in Waterlooville, supporting people with life limiting illnesses, their families and carers in the Portsmouth and South East Hampshire area.  They offer specialist support wherever this is needed, be that at the hospice itself, at home or in the community.

It costs the Rowan’s £6.5m a year to continue their vital work with only a small percentage of this coming from the NHS.  The rest comes from legacy donations to the hospice, and through over 170 fundraising events that take place each year, just like ours.

The team devised a Summer Fete themed day with a Mexican twist!

We welcomed Gemma Carden, Corporate Fundraiser from The Rowan’s Hospice to our head office who gave a talk about the work the hospice does and where our donations can make a real difference. 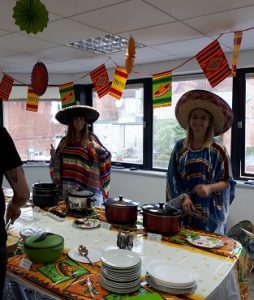 After lunch, the games were officially opened with; a tombola, treasure map, bean bag toss, coconut shy, giant jenga and piñata.  There were on the spot prizes to be won including a bottle of champagne and tickets which would be put towards higher value prizes!

Games closed at 2:30pm and whilst the tickets were counted, some big prizes were auctioned off.  The first item was a day of annual leave which was won by Director Dave Langford.  Up next was a stunning poster print of Portsmouth’s Historic Dockyard by local illustrator Dave Thompson donated by Southsea Gallery.  Bidding was intense between two Directors, with Chris Russell being the ultimate victor.  Our third item was a non-surgical cosmetic treatment voucher donated by LK Aesthetics which went to Consultant Chloe Nicklin.  The fourth and final item to be bid on was the opportunity to shave Senior Consultant Ben Cotton’s head.  Bidding was fierce and eventually slowed to be won by Director Luke Osborne.  A huge thank you to Ben for donating your hair! 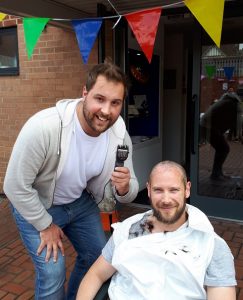 Once the tickets were finally tallied, the final prizes could be given out. These included £50 restaurant voucher, various hair and beauty vouchers, vouchers for the Courtyard Café, Home Coffee and Parade Tea Rooms and a bottle of wine all donated by local businesses.

Overall, we raised an amazing £1262 for The Rowan’s Hospice.  Thank you to everyone for their contributions to the charity.