End of Quarter 3 and Christmas Party

As the year drew to a close, it was time to once again for us at Compass Associates to celebrate the festive season and our third End of Quarter.

For the last couple of years, we have given employees a choice of activities to take part in smaller groups before coming together for the evening’s party.

Our first group headed over to TeamSport Gosport for a ‘mini-grand prix’ around their go-karting track.  After two heats, the fastest drivers went up against each other, fighting it out for a place on the podium.  Richard York from our Care Home division, was first over the line with Director Sam Leighton-Smith crossing not long after.  In third, Principal Consultant Matt Sheppard completed the line up.

The second competitive team made their way to a Compass favourite; Hollywood Bowl at Gunwharf Quays.  A few team members got the chance to flex their bowling muscles walking away with some very impressive scores. Whilst a couple were grateful to have knocked down at least 1 pin per turn… 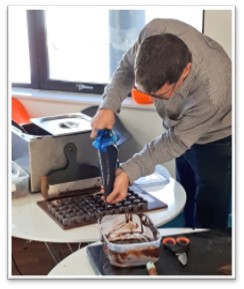 Back at Compass HQ, a far less intense activity took place, with Michael Collins from Portsmouth’s Choc-a-Block gave a chocolate workshop.  The group spent the afternoon learning how chocolate is produced and how Michael makes his delicious, handmade truffles. They also got to have a go at filling their own chocolates too – resident chocoholic Ewan Buckle was delighted! 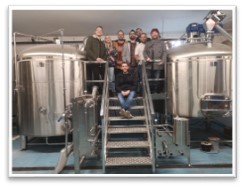 Our last group revisited another of Compass’ favourite venues, Staggerlingly Good Beer brewery.  Since our last visit, the site has expanded greatly which gave the team the opportunity to learn more about the new processes and the brewery’s plans for the future (along with a couple of pints thrown in for tasting!).

The whole company joined together in the evening by the sea at the Portsmouth Pyramids Glasshouse.  Our guests enjoyed a two course Christmas meal underneath the impressive, glass pyramid ceiling.  After dinner, a buffet of mince pies and chocolate brownies were presented whilst CJ the DJ played the tunes into the night.

A great night was had by all and we look forward to our next event to celebrate our 10th birthday in April.