Fundraising and volunteering are actively encouraged here at Compass Associates, especially when the cause is healthcare related.

In the time it takes to bake a batch of cupcakes, six people will be develop with Dementia.  Dementia and Dementia related diseases have overtaken both cancer and heart disease as the UK’s biggest killer and there is currently no known cure.  Cupcake Day has raised over £2 million since 2016 with funds going towards vital research, support services and Dementia care. 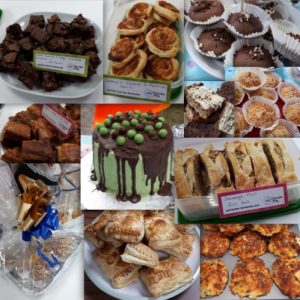 On Friday 14th June, we baked and caked up a storm for 2019’s Cupcake Day.  And it wasn’t just cupcakes on the menu; the delicious array of savoury treats included sausage, goats cheese and caramelised onion rolls, sausage plait, cheese and chive muffins and even toad in the hole!  We also had vanilla and chocolate cupcakes, salted caramel and fudge brownies, chocolate flapjacks and courgette and orange cake on the sweet side of things.  The winner of the bake off was decided by vote and Alex Adams from the Specialist Services division emerged the victor with his impressive, 3 tier mint chocolate Aero cake – well done Alex!

To add an extra layer of fun to the day, we brought back the ever popular game of Recruitment Bingo.  Balls were drawn every 30 minutes with each number corresponding to a recruitment related word.  The first two lines were won fairly quickly and both by Holly Davies from the Specialist Services division!  The full houses took a little more time to come, eventually being won by David James from the General Healthcare division and Ben Cotton from the Care Home division. 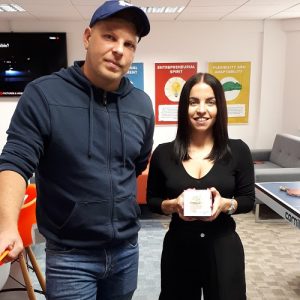 At the end of the day when all the prizes had been won and there were just crumbs left on the table, we totaled up a fantastic £417.

“It was brilliant to be able to coincide our first in-house charity day of the year with a national event for a cause that is so closely linked with the markets we serve.  There were some amazing baking efforts, even those who don’t normally bake gave it a go which was great to see.  I’m so pleased that we could raise more awareness for The Alzheimer’s Society and of course, raise a good amount of money for them too.” Rachel Kraan, Senior Consultant & Charity Committee Member

Thank you to everyone who baked, ate and played, and most importantly, donated to The Alzheimer’s Society.