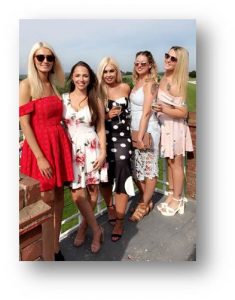 As is Compass tradition, End of Quarter is a time to get the whole business together for celebration and recognition of a great quarter completed.  This time we were returning to Goodwood Racecourse for the final of the Three Friday Nights events, so we celebrated a little earlier than usual on 15th June. 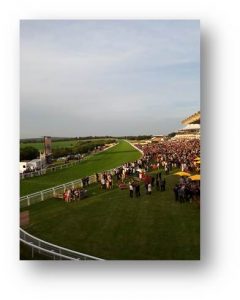 Luckily, it wasn’t such a scorcher as last year but still lovely, and sunny and warm.

We were welcomed into the Charlton Box with glasses of Pimms and enjoyed spectacular views of the racecourse and the South Downs.

Racecards were carefully studied and bets were placed in anticipation of the first race.  We were served a delicious Thai curry ahead of the racing which went down a treat.

There were lots of winners on the first race with Poet’s Society crossing the line first.  Quite literally shock and surprise in the second with favourite Jungle Juice losing to Society Shock—which did indeed shock those who had backed him, returning a significant win!

More bets were won and lost on the remaining races, however, the evening was only just beginning as world famous, electro house DJ Steve Aoki took to the stage at the Parade Ring.  Ravers gathered on the grass to bounce along to the beats as lasers filled the sky.

Steve Aoki is also known for “Cake Face” and at the end of every set he plays, throws at least 1 cake into the crowd.  On this occasion, he had 4 cakes to throw and our very own Joe Pullen and Zenon Raddon were caught in the line of cakey fire.  Sadly, for Joe it meant that no one wanted to sit next to him on the bus back to Cosham…

We hope that you all had a fantastic time and that there were not too many sore heads the next morning…!  Our next End of Quarter event will be in October.