Compass Associates place a strong emphasis on raising money for charity and 2012 saw lots of activity on this front.

Mike Jeffreys, Sam Leighton-Smith, Chris Russell, Katie Berry and Maria Saunders
completed the Alzheimer’s Society Memory Walk  on Saturday 15th September.  It was a lovely sunny day and they raised a whopping £205, which went towards continuing the charity’s support for sufferers of dementia and alzheimers, funding vital research into the disease.

Back at the office on the 26th October Compass employees supported St Mungo’s with a ‘Woolly Hat Day’. St Mungo’s support homeless people in London and the South including shelters and hostels, help with addiction recovery and the prevention of homelessness. The fashion stakes weren’t the only thing raised by the annual fundraiser, £50 was the final figure given to the charity and the picture below was even re-tweeted by St Mungo’s!

Hot on the heels of previous charitable activity saw Children in Need on Friday 16th November.  Various baking and donating saw the day fly by and a total of £63 was raised.  Since 1980 Children in Need has raised over £600 million to change the lives of disabled children and young people in the UK. 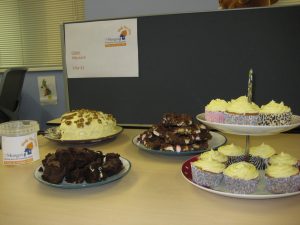